The Londonier was a steel hulled steamer launched in West Hartlepool on 28th August 1911. Built for a Belgian company, the ship was named Vrijhandel (Dutch for free trade), and operated under the Belgian flag until approximately 1916, when it was renamed Londonier and, shortly after, put on charter to the French government.

On 13th March 1918 the Londonier had crossed the Channel and was steering a course in the direction of the Needles en route from Calais to the Bristol Channel. The UC-71, a German submarine under the command of Oberleutnant zur See Warzecha, executed a surface attack, torpedoing the Londonier at 2am on 13th March.

Sven Degryse, the ship’s master, reported that the Londonier was altering course, due to the sighting of a submarine on the surface 200 yards away immediately before the explosion. The torpedoes struck the Londonier on the fore side of the engine room on the port side. The vessel was abandoned as it  sank quickly; 13 men managed to reach the ship’s boats and rafts but 12 lost their lives. The survivors saw the conning tower of the UC-71 as it submerged and disappeared.

The wreck lies upright in 40m of water but has collapsed to starboard. The engine is the highest part of the wreck and the propeller shaft is clear of the wreckage. In the stern the gun lies on its side. The bow section is broken and low to the seabed. This site information has been provided by Mr David Wendes, a local maritime historian who has also carried out extensive archival research on the vessel. The results of this research can be viewed in: Wendes, D. 2006. South Coast Shipwrecks off East Dorset and Wight: 1870-1979.

No previous archaeological survey had been made of the wreck site, but it is a popular dive site and has been frequently dived by sports divers. The vessel’s identity was confirmed by crockery recovered from the site during diving activity.

Diving on the Londonier site took place in 2010 from the dive boat Wight Spirit. The diving activities on the site were part of the Archaeological Atlas of the 2 Seas project, and were undertaken in the window of slack or near slack water. The main purpose of the activities was to confirm the position, extent, stability and character of the site; taped measurements of observed archaeological features were recorded. 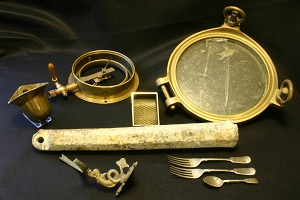 The tasks undertaken were limited by the diving conditions (the visibility was only about 0.5 metres), but it was possible to discern the vessel remains scattered around on a flat seabed comprising sand and gravel. Most of the wreck lies flat on the seabed; the exceptions being the engines, boilers, donkey boiler and rudder which stand vertically. The engines are the highest part of the wreck, approximately 4-5m above the seabed. The stern face of the starboard boiler is missing, revealing the water pipes inside. Aft of the engine it is possible to follow the propeller shaft to the stern of the wreck where the gun is visible. Life-jackets can be seen pinned under frames adjacent to the port side of the propeller shaft. Forward of the boilers the wreckage is more disparate with plates lying flush with the seabed. Two anchors are visible at the bow, still in the hawse pipes.

This vessel has an online interactive which can be found here.

This website uses cookies to improve your experience while you navigate through the website. Out of these, the cookies that are categorized as necessary are stored on your browser as they are essential for the working of basic functionalities of the website. We also use third-party cookies that help us analyze and understand how you use this website. These cookies will be stored in your browser only with your consent. You also have the option to opt-out of these cookies. But opting out of some of these cookies may affect your browsing experience.
Necessary Always Enabled

Performance cookies are used to understand and analyze the key performance indexes of the website which helps in delivering a better user experience for the visitors.

Analytical cookies are used to understand how visitors interact with the website. These cookies help provide information on metrics the number of visitors, bounce rate, traffic source, etc.

Advertisement cookies are used to provide visitors with relevant ads and marketing campaigns. These cookies track visitors across websites and collect information to provide customized ads.

Other uncategorized cookies are those that are being analyzed and have not been classified into a category as yet.