Shipwrecks for the Senses

Shipwrecks for the Senses

Following the Maritime Archaeology Trust’s (MAT) successful Forgotten Wrecks of the First World War project, the Friends of the Maritime Archaeology Trust, with the help of the National Lottery Heritage Fund, used outputs from the project to help more people learn about their heritage through the Shipwrecks for the Senses project. One of the projects objectives was to engage with groups that have issues with varying degrees of deafness, blindness, and the elderly who can find everyday access to this information difficult. 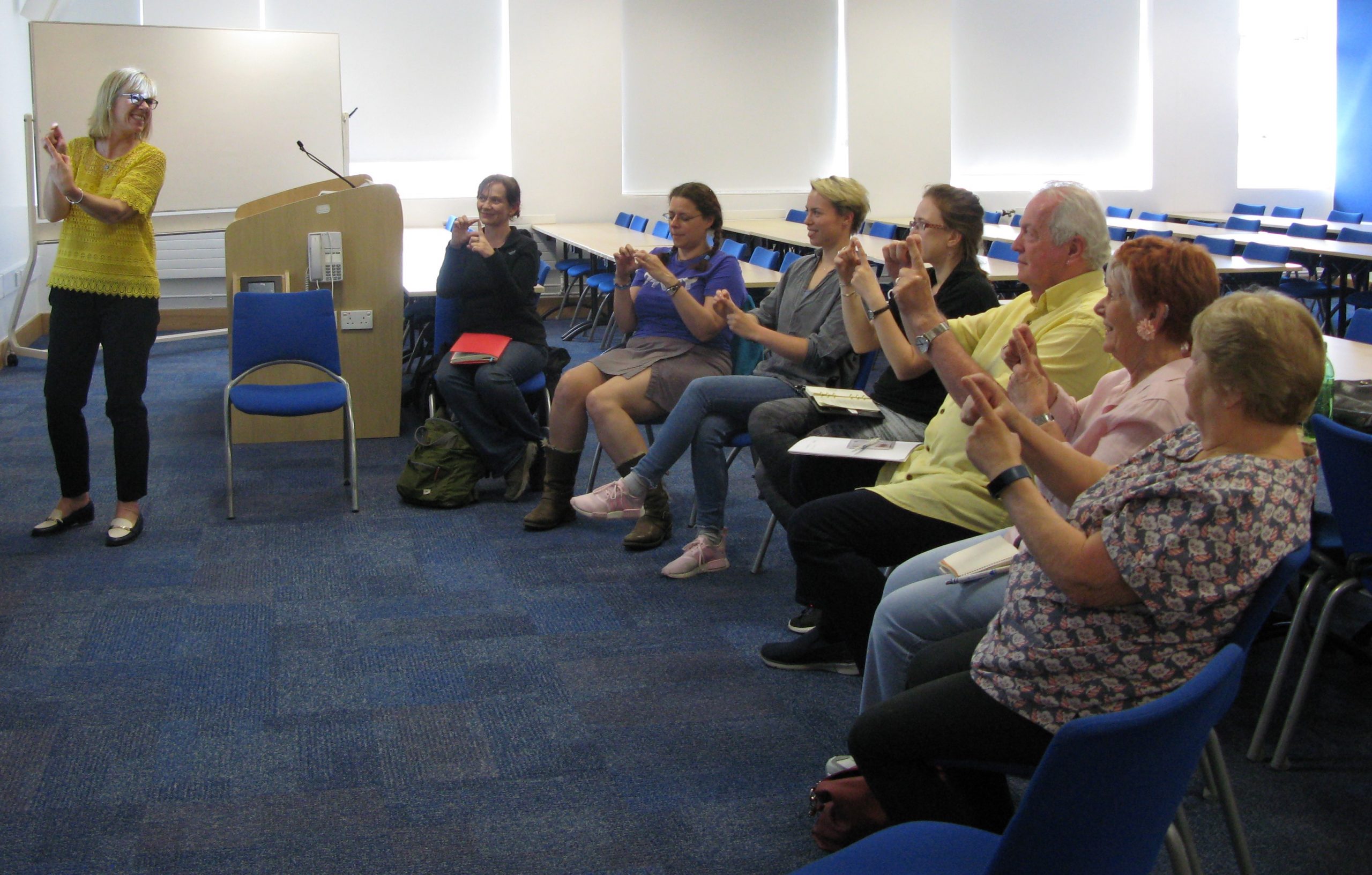 Volunteers from the Friends of the Trust undertook training to help deliver sessions undertaking workshops in confidence in communication and basic sign language skills with Sonus (association for deaf people), and Visual Awareness with Open Sight. This provided new skills for volunteers that can also be used in other education and learning applications. 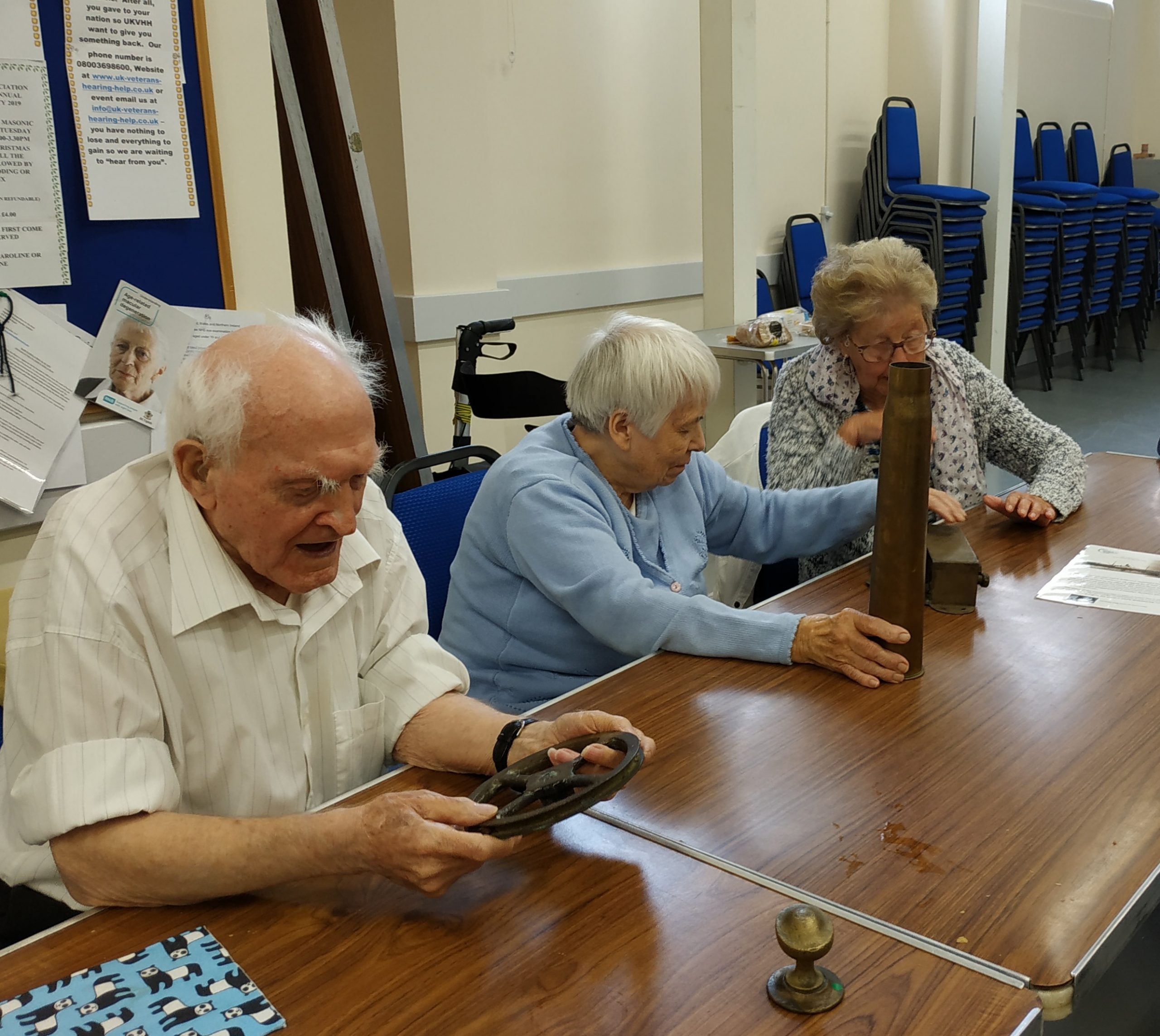 Group sessions were arranged at 15 various locations around Hampshire and the Isle of Wight for those with hearing and sight impairment. Artefacts from the Forgotten Wrecks Project, along with their stories, were taken for people to engage with through sensory experiences. Hands-on activities with the artefacts, along with stories of the maritime struggles during WW1 and original letters from the National Archives at Kew, all brought a learning experience in an enjoyable and stimulating way to those who might find it hard to access this information.

Artefacts included a porthole and turnbuckle from the SS Camberwell, which carried cargo between the UK and India before hitting a mine on the 18 May 1917 and sinking off the Isle of Wight with the loss of seven men. Participants were also able to explore the wide variety of goods the ship was carrying. 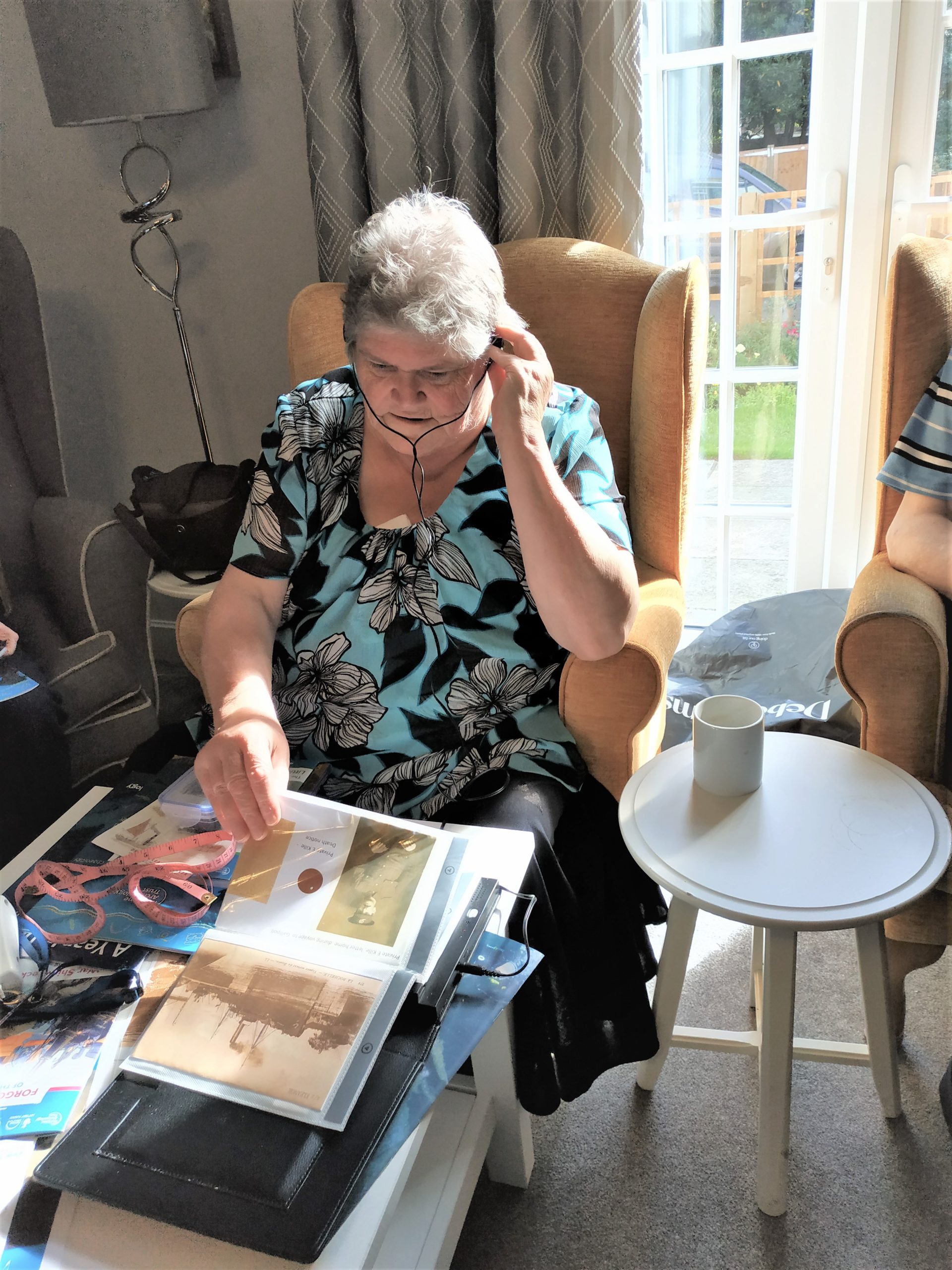 Participants also got hands-on with shell cases and steam gauges, and an oil box from the SS Westville, which was used to feed oil into the enromous triple expansion steam engine which now lies on the seabed south of the Isle of Wight after the Westville was torpedoed by UB-35 on 31 December 1917. This ship had the dubious distinction of being the last ship sunk in 1917 but miraculously all of the 30-man crew managed to escape, the ship capsized within 4 minutes and sank within 20 minutes taking with it all confidential papers, codes and logs.

As well as artefacts, participants could immerse themselves in the shipwrecks using Virtual Reality and those that were able to could view the 3D models. Audio articles telling the stories of the shipwrecks and their crews and original letters, were also accessible for people to listen to. Ships such as the SS Eleanor that had only one survivor after it was was torpedoed by UB-57 were poignantly brought to life with recordings of documents found in the archives. You can listen to some of the recordings here:

Getting the word out 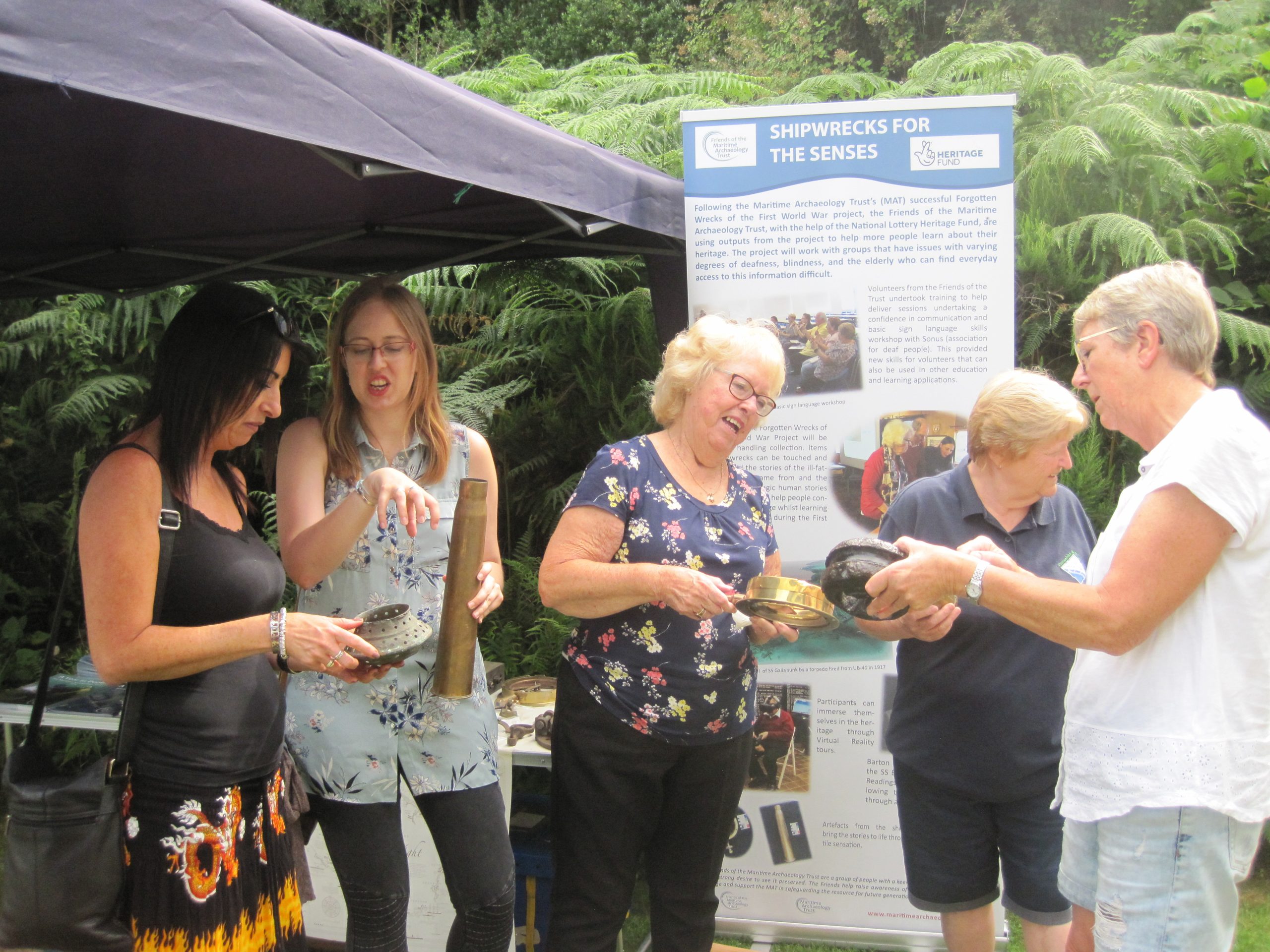 People were able to visit various events learn about the project and how using different senses can enhance the learning experience.

More information on the wrecks and artefacts from the project are on permanent display at the World War 1 Remembrance Centre in Portsmouth. For an interactive learning experience about the wrecks and the war at sea visit the Forgotten Wrecks of the First World War interactive map. 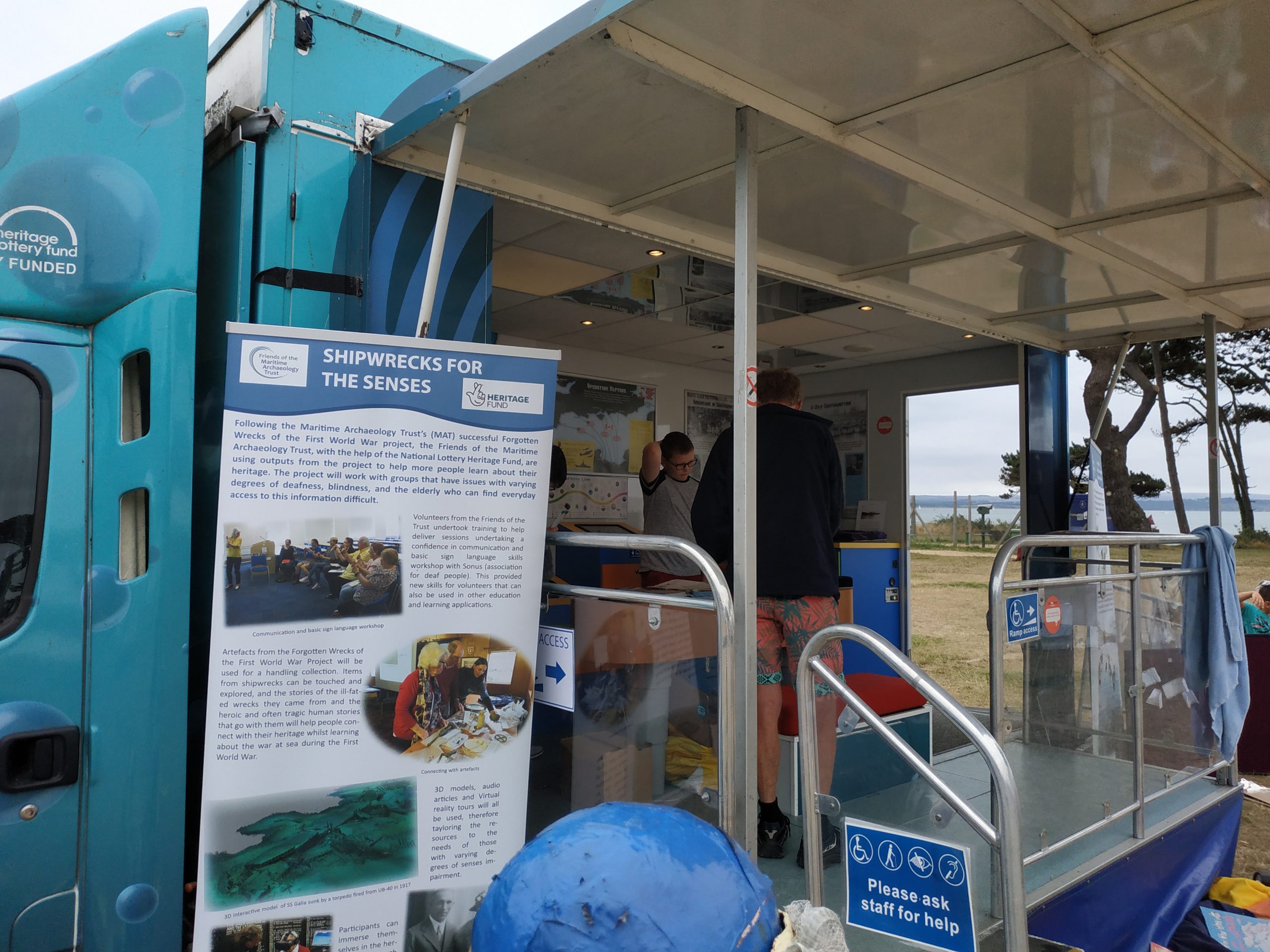 All of the 15 groups (over 300 people) visited during the project enjoyed the experience and many of the participants said they learned something new. The volunteers who helped deliver the sessions learned new skills from the training workshops, and remarked that they found it very rewarding bringing the Forgotten Wrecks of the First World War to those living with sight and hearing difficulties in this unique way.

The Friends of the Trust will use their new found knowledge and experience to continue to reach and engage new and hard to reach audiences as they so successfully did on the Shipwrecks of the Senses project, and special thanks once again should go to the National Lottery Heritage Fund and all of the Lottery Players.

This website uses cookies to improve your experience while you navigate through the website. Out of these, the cookies that are categorized as necessary are stored on your browser as they are essential for the working of basic functionalities of the website. We also use third-party cookies that help us analyze and understand how you use this website. These cookies will be stored in your browser only with your consent. You also have the option to opt-out of these cookies. But opting out of some of these cookies may affect your browsing experience.
Necessary Always Enabled
Necessary cookies are absolutely essential for the website to function properly. These cookies ensure basic functionalities and security features of the website, anonymously.
Functional
Functional cookies help to perform certain functionalities like sharing the content of the website on social media platforms, collect feedbacks, and other third-party features.
Performance
Performance cookies are used to understand and analyze the key performance indexes of the website which helps in delivering a better user experience for the visitors.
Analytics
Analytical cookies are used to understand how visitors interact with the website. These cookies help provide information on metrics the number of visitors, bounce rate, traffic source, etc.
Advertisement
Advertisement cookies are used to provide visitors with relevant ads and marketing campaigns. These cookies track visitors across websites and collect information to provide customized ads.
Others
Other uncategorized cookies are those that are being analyzed and have not been classified into a category as yet.
SAVE & ACCEPT