The Offshore Aggregates and Species Inhabiting historic Shipwrecks (OASIS) project aimed to demonstrate the importance of the marine environment as a whole, highlighting the interdependence of seabed deposits, sea life and historic shipwrecks. The project was funded by The Wildlife Trusts South East Marine Programme and Natural England (then English Nature) through DEFRA’s Aggregate Levy Sustainability Fund.

The marine areas around the Isle of Wight are among the most important sand and gravel extraction areas in UK waters. The reason for this is twofold. Firstly, large amounts of gravel were deposited in this area at the end of the last Ice Age as the ice retreated (around 15,000 years ago). Secondly, new deposits of sand and gravel are constantly supplied to the area via a dynamic tide and wave system from the south-west known as longshore drift. Throughout these natural sediments, there exist  traces of cultural heritage, both in the form of shipwrecks and evidence of early human occupation.

A shipwreck provides an excellent habitat for marine life. Almost immediately a ship comes to rest on the seabed an ecosystem will start to establish itself. This ecosystem will eventually become varied and prolific, with an astounding number of different species often inhabiting a very small area. The wreck acts as a reef that will provide shelter for numerous species of fish and crustaceans, and the fact that they are usually raised from the sea bed makes ideal habitats for sea anemones, coral and fan worms, which feed by filtering the sea water as it flows by.

The OASIS project focused on wreck sites in the West Wight area including the Fenna, Borgny, and War Knight. Diving took place on these artificial habitats to record the marine life living on them. The information was used for the Marine Week event held at Fort Victoria in 2005 and displayed at the Sunken Secrets centre throughout 2009.

We currently have an updated sealife and shipwreck habitates education box for sale. Click here for more information.

Much of the ship’s lower hull structure lies beneath the sands and gravels of the seabed. The majority of timber that has not been buried has been eroded or eaten away. The barrels which held the cement have disappeared leaving solid cylinders in the shape of the barrel interiors.

Some of the organisms that eat wood are marine borers such as shipworm (Teredo Navalis) and gribble (Limnoria Lignorum). The gribble resembles an ordinary woodlouse, and feeds on unprotected timber, leaving a hollow cylindrical borehole. Shipworm is a mollusc with a worm-like body. Only a small portion of the body is covered by shell, so the worm bores into wood to protect itself. The boring and feeding action of these two species weakens the host timbers, severely damaging any exposed hull structure.

A common sight around Fenna is bib. These fish are members of the cod family, but are much smaller than the cod we are accustomed to, with adults growing to around 40cm in length. The body of the bib is coppery coloured with four or five distinctive bands and on their chin they have a single barb, which makes the bib an easily identifiable fish.

Lobsters also can often be found using Fenna as a home. The remaining cargo of railway tracks, sheet glass and solidified concrete provide excellent hiding places for them. Lobsters are dark blue in colour, with pale yellow markings and red antennae. At night they can be found roaming the seabed around the wreck searching for food. Lobsters will eat almost anything organic found on the seabed, dead or alive, and are even known to be cannibals. 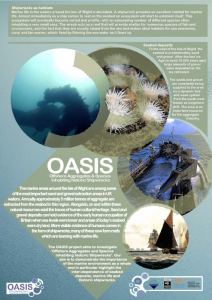 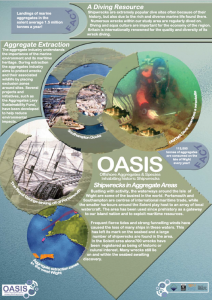 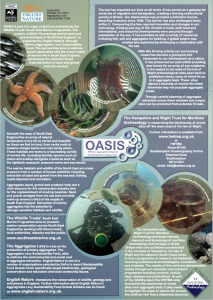 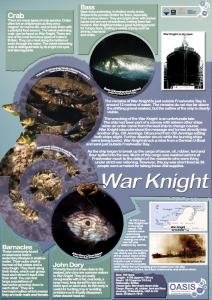 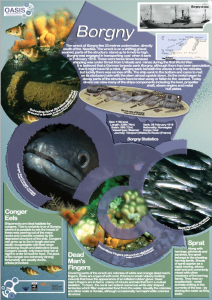 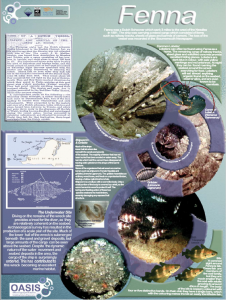 Fenna
We use Google Analytics, Google Tag Manager, and Google Ads to track user acquisition and behaviour; this allows us to review the way users are interacting with our site in order to improve user experiences. Data is aggregated and anonymised so no personal data can be attributed to an individual session or a location. By clicking “Accept”, you consent to the use of ALL the cookies. Read More
Cookie settingsACCEPT
Manage consent

This website uses cookies to improve your experience while you navigate through the website. Out of these, the cookies that are categorized as necessary are stored on your browser as they are essential for the working of basic functionalities of the website. We also use third-party cookies that help us analyze and understand how you use this website. These cookies will be stored in your browser only with your consent. You also have the option to opt-out of these cookies. But opting out of some of these cookies may affect your browsing experience.
Necessary Always Enabled
Necessary cookies are absolutely essential for the website to function properly. These cookies ensure basic functionalities and security features of the website, anonymously.
Functional
Functional cookies help to perform certain functionalities like sharing the content of the website on social media platforms, collect feedbacks, and other third-party features.
Performance
Performance cookies are used to understand and analyze the key performance indexes of the website which helps in delivering a better user experience for the visitors.
Analytics
Analytical cookies are used to understand how visitors interact with the website. These cookies help provide information on metrics the number of visitors, bounce rate, traffic source, etc.
Advertisement
Advertisement cookies are used to provide visitors with relevant ads and marketing campaigns. These cookies track visitors across websites and collect information to provide customized ads.
Others
Other uncategorized cookies are those that are being analyzed and have not been classified into a category as yet.
SAVE & ACCEPT